Harry Potter and the Woman in Black

Good mourning guys and ghouls! For night 5 of #30nightsofhorror I watched the The Woman in Black (2012). I watched this one in the theater when it came out, but due to my terrible memory, it was like new again on my second viewing. I have to be honest- I definitely only went to see this because Daniel Radcliffe, aka Harry Friggin' Potter, was the lead. Here he is looking handsome in his old-timey suit. Clearly he doesn't trust that monkey.

Poor, poor Arthur (Daniel Radcliffe). The townspeople want absolutely nothing to do with him. He shows up full of good intentions, but he's shunned at every turn. What is interesting is that Arthur has suffered no less than The Woman in Black has. He has every reason to turn into a vengeful psychopath too, but he doesn't. The death of his wife caused him to just kind of go numb. I'll say this for the Woman in Black, though- she's certainly not lazy. Her relentless pursuit of murder and mayhem is an inspiration. Where ever does she find the time?? She looks fabulous while doing it. 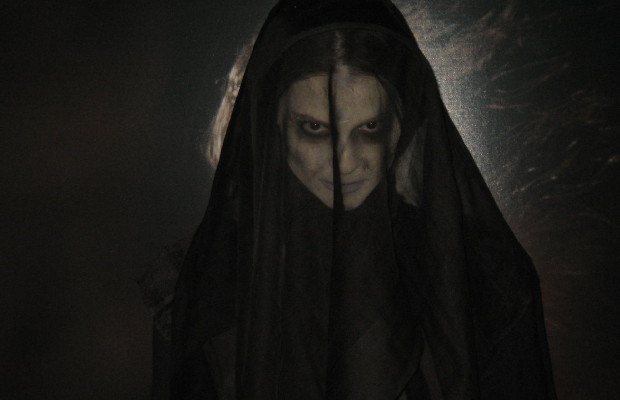 I'm a sucker for beautiful sets and costumes and this movie delivered on that front. The house that they filmed in was breathtaking. I found it interesting that despite the fact that it was a "period piece," it still managed to feel modern. The themes were universal and the characters felt like they could be in any period. Terrifying children are timeless.

I actually found this movie to be quite unsettling. Just catching a glimpse of The Woman in Black was enough to make my imagination go wild! These were chills more than scares, which I really enjoy. I will be watching this one again, and I'm not just saying that because Harry Potter looks great in a suit.

Until tomorrow, my fiends,